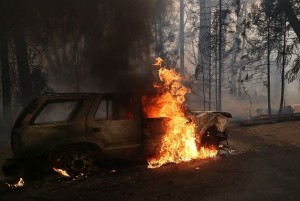 According to a report by the Federal Emergency Management Agency made in 2013, car fires spike in number particularly in the summer months. According to FEMA highway fires are also much more common than regular fires and occur through most of the year. However, the highest numbers are reported in July with an overall 28% of all vehicle highway fires occurring over the summer months of June, July, and August.

The National Fire Protection Agency has come out to say that 17 car fires are reported a day in the summer and that nearly four people die of them every week. Car and other vehicle fires tend to happen more often during the afternoon and evening. Also, they occur more during rush hour. They are not very common during the morning rush hour however, which is between 5 and 7 in the morning. Although accidents only account for 4% of vehicle fires; those are the ones that account for 3 out of every 5 deaths.

The U.S Fire Administration claims that out of every 7 calls in the summer months; one will be for a car fire on the highway. They also claim that between 2007 and 2011 nearly 229,500 fires occurred every year and claimed 328 lives annually along with 1,426 severe and non-severe injuries. Each year car fires cause nearly $1.4 billion property damage; this includes the car itself, property within the cars, as well as the property that the car was on when the fire started. In 2012 nearly 172,500 fires that were reported took place and they resulted in 800 severe and non-severe injuries, 300 deaths and $1.3 billion in property damage. Again this includes damage to the car, belongings, and property on which the vehicle fire took place.

Teenage drivers are those who are more likely to be caught in a vehicle fire and males more so then females. Yet, all of these fires are caused unintentionally, basically by accident. Also, 86% of these fires happen in cars that carry people, not trucks carrying goods.

There are still instances where vehicle fires are NOT accidental. In fact, according to the FBI, from 2003 until 2012 more than 14,700 car fires turn out to be arsons and they actually accounted for 26.5% of yearly arsons.

There are ways that vehicle fires can be prevented, and steps should be taken in order to protect you, your family, and your vehicle. First, make sure to get your car inspected for loose wires and faulty electrical work. By doing this you minimize the risk of an electrical car fire. Fires can also be started by worn out breaks, damaged heat shield, and leaking tubes. According to AAA mid-atlantic, poor maintenance is actually a huge component to car fires especially in an older car which can have faulty electrical work.

Car fires can also be dangerous because they spread toxic gases and harmful gases. These gases can be harmful and can actually be deadly. In fact, this is one of the big reasons that you should try to reduce the chance of a car fire.

Don’t Unplug It, Protect It! (Importance of Surge Protectors)