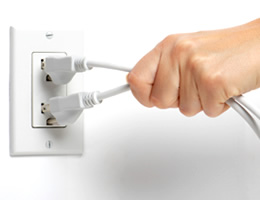 What are Electrical Surges? Importance of Surge Protectors

When a power surge runs through your electrical lines, it can cause serious damage to the electronics and appliances in your home. In addition, it could also compromise the safety of your family. A power surge occurs when a strong electrical current travels through your power, cable or telephone lines. To protect your home against such surges, you should consider getting home surge protectors.

Electrical surges have several different causes, most of which are usually unpreventable. The best way to shield your home and valuables is to get the best protection against these surges. There are two types of electrical surges:

External Electrical Surges – External power surges are usually caused by the weather. They can cause damage to home appliances, electronic devices and systems in your home. Lightening is the most common cause of power surges in the home.

When lightening strikes a transformer or near your home, it can send a strong electrical current through your home and cause severe damage. Along with damage to your electrical systems and electronics, these surges can sometimes start fires.

Internal Electrical Surges – Although these power surges are caused by internal issues with your electrical system, they are similar to external surges in that they usually cannot be detected and they can cause significant damage to your home and property. The two most common causes of internal power surges are:

Utility Disturbances – Many times utility disturbances are caused by overloading the electrical system by plugging too many devices into electrical outlets. Overloading outlets can lead to power surges, power outages and electrical fires. Power strips can provide space to plug in several electronic devices, but most power strips or power bars have only minimal, if any, surge protection.

Blackouts – After blackouts have occurred and the power company restores your electricity, a surge of power can run through your electrical lines and damage your electrical equipment. This surge is unpredictable, but the damage can be prevented.

Why Power Surges Cause Damage

When high voltage electrical currents pass through your electrical lines, they can pass through your appliances and electric devices. The high amounts of voltage can easily burn out the electronic boards in these devices and make them useless. Sometimes the currents will slowly build up in electronic devices and the accumulative damage can cause the device to stop working.

These high voltage currents can also generate heat, which can damage electrical components or electrical wiring. The heat generated from these damaging currents can sometimes cause dangerous electrical fires as well.

How Surge Protectors can Save Money

How do Surge Protectors Work?

A good quality surge protector acts to stop a power surge from making its way to the devices plugged into it. When a power surge occurs, the surge protector absorbs the extra power and shut itself down so that the surge cannot continue to travel through power cords to damage your property. When that occurs, your appliances and devices will shut down before damage can occur.

Car Fires Are More Common in the Summer!
Scroll to top