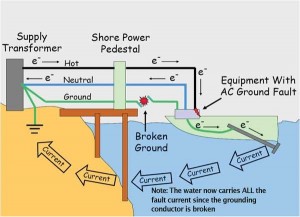 Both swimming and boating on lakes are a popular hobby, and they are also pastimes where safety is a serious consideration. Therefore, it took the Ritz family totally by surprise when their son Lucas was tragically killed whilst swimming in a lake despite wearing a life preserver, and with his mother keeping a watchful eye nearby. The Ritz family thought that they had taken all of the necessary precautions to keep themselves and their children safe, however, no one could have foreseen the danger that was hiding in the water.

Unfortunately for Lucas and his family, the danger that would claim his life was invisibly lurking actually in the water in the part of the marina where he and his family had been happily swimming. That danger was electricity, which was, unbeknownst to the Ritz family was bleeding from a nearby boat. The boat was moored and connected to a power supply on the shore, and Lucas was electrocuted when he swam in to the area where the electric current had energized the water.

The death of Lucas was just the latest in a series of deaths that claim the lives of dozens of people each year by what has now become known as Electric Shock Drowning (ESD). In recent years ESD has been linked to the deaths of over 100 people across the U.S.

Yet, in most cases of ESD the autopsy of the victim showed no sign of any kind of electrical injury, therefore, it is certain that there have been a number of other ESD related deaths that have gone unreported. Also, if there are not witnesses present to alert the authorities to the possibility that electricity might be the cause, the officials will often curtail their investigation in to the death, and merely list the cause as a simple drowning.

As a result of the death of Lucas, the Ritz family is currently working towards teaching other people of the dangers of Electric Shock Drowning. Their goal is to educate people on the dangers and how they can avoid ESD claiming them as its next victim by avoiding swimming close to docks and marinas with a power supply.

They also want to educate marina and boat owners on the dangers of neglecting electrical systems that are situated near to water, and how important it is to regularly check and maintain their electrical systems.